The Blonde Leading the Blonde 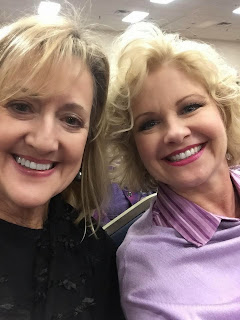 Ever lived out a bad dream in real life? I just did! On the program as one of the speakers/singers last weekend at a women's retreat in the beautiful mountains of Pigeon Forge, TN, the worship leader called me up on stage to join the team in a song I had only heard but did not know and had NEVER sung before, certainly not in public on stage before 450 women. I had shared 2 speaking sessions that included my own music, and was finished with my part of the retreat.  Or so I thought.  But here I stood, on the stage, mic in hand, having NO CLUE what I was doing!  Oh how thankful I was for my sweet friend Sylvia Harney Widick, hilarious comedian/dynamite speaker who was also on the program as one of the keynote speakers.  She and I were thrilled to be reunited and serving together again after years before being privileged to do so.  There she was on the front row, literally moving her hands up and down like a pre-school music teacher would do for me to kind of know where the pitch was going.   She saved my life! Never a dull moment traveling the country/singing in this ministry life.  Little did I know then that not only did I not know that song, neither did she!  But she said that the look on my face told her I was in trouble, and she just decided she could tell well enough where the tune was going to attempt to help her friend in need!  Her comments when I posted this story on my facebook?  "Wasn't that hilarious and fun???  Plus...I had never heard the song before either.  It was a blonde following a blonde...it was sooooo pretty."  I had given her such a hard time all weekend, as she too, is blonde, and every time she would have a blonde moment, you know the saying and what it implies, I would look at her like my daughter and I do each other when we have those moments and simply say, "You are so pretty."
Sometimes it truly does feel like the blonde leading the blonde in this world!  And when those moments come, I just love that at this stage in life, I can laugh!  At myself, at others, with others, just flat out laugh!
"A cheerful heart is good medicine..." Proverbs 17:22 says.  And that is the Truth.  Will I ever forget living out that nightmare?  Definitely not!  But even more importantly, I will cherish the shared laughter between my sister friend and me as we experienced it together.  Oh how blessed we are when we walk out this life...the unexpected moments and all...with a dear friend.
Posted by Unknown at 1:00 PM

My name is Dawn and I'm so delighted you are visiting my blog today. I am a Christian, speaker, musician, singer/songwriter, charting recording artist with Urgent Records, as well as an author. I have recorded 13 CD’s and written two books and am a former Miss South Carolina and 2nd Runner-Up to Miss America (1986). CBS produced a made-for-TV feature film based on my life story entitled “Nightmare in Columbia County.” I have performed and ministered in thousands of churches during the past 25+ years of ministry (75+ events a year), most recently on “On the Case with Paula Zahn” on the Investigation Discovery Channel. I was also recently published in Lifeway’s Journey magazine in their January and February 2014 issues. I am the mother of two children, Hannah and Ross. We make our home in Columbia, SC. My life Scripture is Proverbs 3:5-6, “Trust in the Lord with all your heart and lean not on your own understanding; in all your ways acknowledge Him, and He will make your paths straight.”